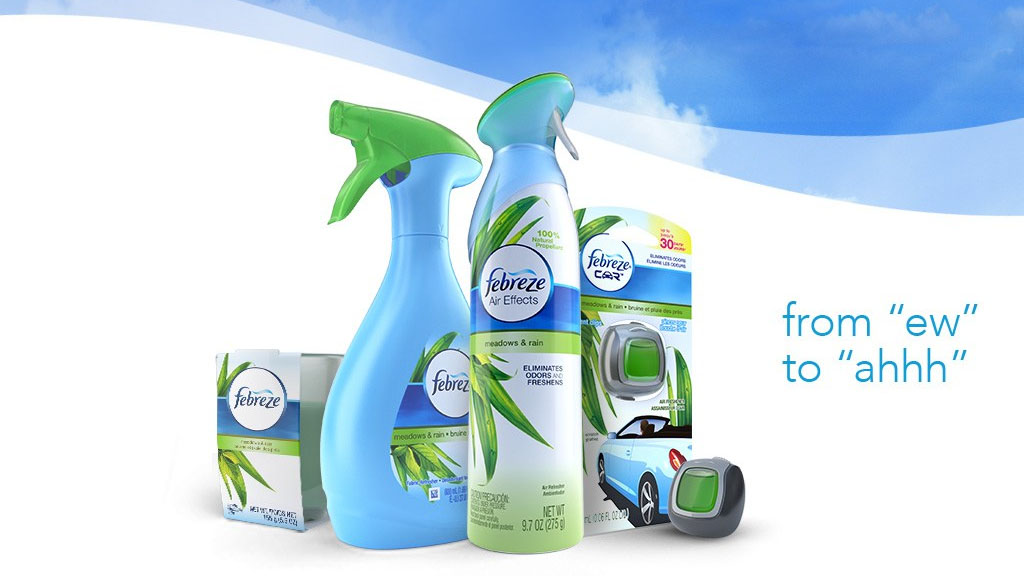 Back in the early 1990s, the world’s largest consumer goods company, Procter & Gamble, was busy working on a new product.

It was a spray that would completely eliminate bad odours. From wet dog stenches to the lingering smell of cigarette smoke, Febreze was meant to become a revolutionary golden-goose product that would bring in billions of dollars of revenue to the company every year.

In the end, it did. But only thanks to the intervention of home use testing. So, with that in mind, let’s look at how one of the world’s most successful products nearly didn’t make it.

P&G scientists had long been working on a colourless, odourless liquid that could make any stinky sofa, rug, or jacket scentless. That substance was called hydroxypropyl beta-cyclodextrin (or HPBCD for short).

There was great joy when, after testing, the liquid performed exactly as advertised, eliminating bad smells from fabrics, even ones that were deeply entrenched. The marketing team took these results and decided that they should position Febreze as something that would allow people to rid themselves of embarrassing smells.

With great fanfare and a series of high-profile TV adverts, Febreze was launched in 1996. However, it was a total flop, with sales only reaching a fraction of what analysts had hoped.

In a bid to find out what went so disastrously wrong, P&G decided to spend time in the homes of their target customers and view first-hand what the issue was.

How Home Use Testing Saved the Day for Febreze

The company sent out samples and visited hundreds of women in their homes to gain a better understanding of how they missed the mark so badly. Two women, in particular, revealed their issues and began the journey toward creating one of P&G’s most successful products to date.

The first was a woman who owned nine cats. The house stank, but the woman couldn’t smell the putrid scent, proving that even the most pungent of smells failed to be noticed by those constantly exposed to it. In other words, the target market for this product didn’t even know they needed it because they couldn’t detect bad smells in the first place.

Another trip to a woman’s home who used Febreze every day provided a lightbulb moment for the marketing team. She used to spray Febreze whenever she would finish cleaning a room. For instance, in the bedroom, she vacuumed, made the bed, plumped the pillows, tightened the bed sheet’s corners, and then took a Febreze bottle and sprayed it as a final touch.

They saw the same pattern across thousands of home visits to housewives (the target market), and then it suddenly clicked. No one craves odourlessness. Instead, they wanted their home to smell every bit as good as it looked.

Febreze was quickly repositioned as a nice smell to add to your room at the end of the cleaning routine. Instead of eliminating scents, it became an air freshener, used as the finishing touch. Febreze was relaunched in 1998, and sales nearly doubled within two months.

Today, this P&G product line brings in billions of dollars, and the range includes candles, laundry detergents, and kitchen spays, to name but a few. Without those thousands of home visits to uncover Febreze usage habits, P&G might have scrapped this failing product before losing any more money in research and development costs.

Speak to WSS Regarding Your Home Use Testing Projects Today

While they got there in the end, P&G lost millions on their Febreze product line before striking a winning balance. It’s doubtful that you have the same resources as P&G. Thus, it’s crucial for you to get your product right upon launch.

At WSS, we can help you avoid some potentially catastrophic mistakes by carrying out consumer research within the homes of your target consumer. By putting your product through its paces within its intended environment, you can ensure that any faults are found and fixed before it hits the shelves.

To learn more about how extensive home use testing can benefit your new product launch, contact WSS today. One of our experts will be more than happy to discuss your requirements in further detail and provide advice regarding the best research methodologies.